1) Quest begins at Giran Castle Town with the Prefect Vokian at Orc Guild. If you read the conversation, you will need to go collect items from monsters. 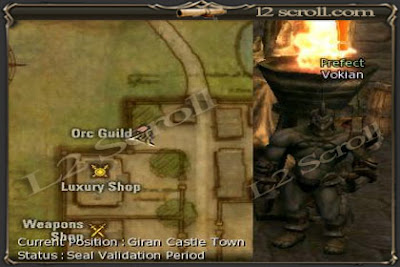 a) Collect the item 10 fragments from Manashen Gargoyle located in Ivory Tower crater. 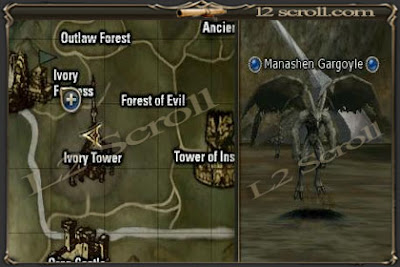 b)  Collect 10 toenails from Tilunt [or Tyrant] located in Wasteland. 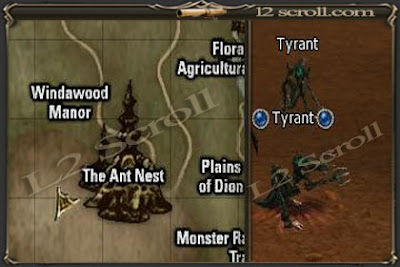 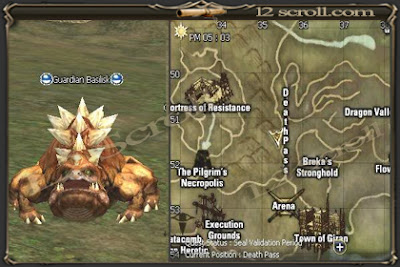 2) After you collect the 3 items, return to go see Vokiyan. This time he will give you the quest item Necklace of Power [power/authority] and send you to Dion Castle Town to talk to Gandi Chief Chianta.

3) Go to Dion Orc guild and talk to Gandi Chief Chianta.Chianta will ask you to bring back 5 lower orc tribe seals. Note, the five tribes are Breka, Enku, Leunt, Vuku, and Gandi. 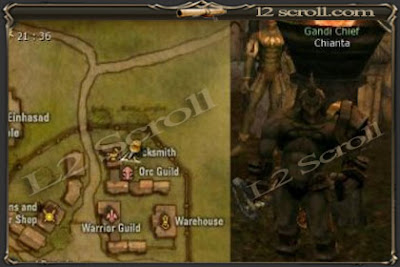 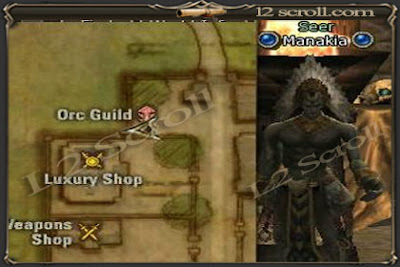 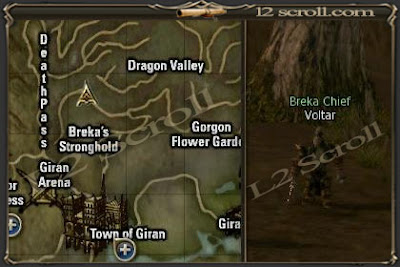 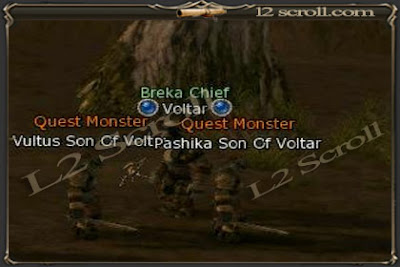 6) Now go to Dion and from there to Beehive and find the Enku Orc tribe's chief Kepra .He is  over a rock near the entrance to the Hive Fortress. He will invoke 4 Monster Quest Enku Orc Overlord. Kill them and talk again with Kepra and he will give you the tribe seal Kepra (Scepter of Enku). 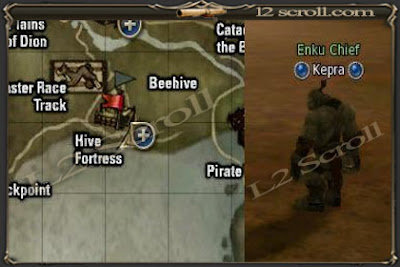 7) Now go to Gludin Village (If you want to save teleport go to southern entrance to wasteland and use the scroll of escape and you will go to Gludin Village). Talk to Prefect Kasman. He will give three options. Talk to him three times to get the 3 letters. He will say where is the other 3 orcs: Vuku, Turek and Leunt. 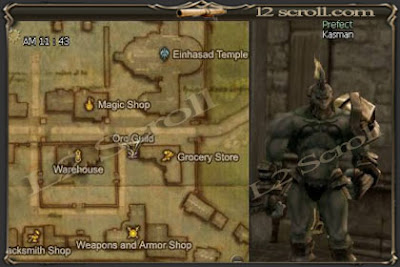 8) Go to the area south of Forgotten Temple. Follow the road until you see an Orc camp, go around the camp and head towards the beach and you will find the Leunt Chief Harak. Talk to him and he gives you the Leunt seal. 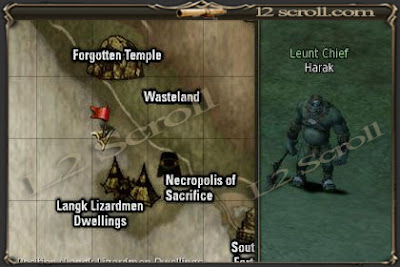 10) Now go to Orc Barracks north of Gludin. Find Turek Chief Burai. Careful there because the Turek orcs will attack from all sides, kill the monsters in the area around him BEFORE you talk to him  because when you talk to him, he will draw 2 Turek Bugbears. Kill them and talk again to Burai and get the Turek's seal. 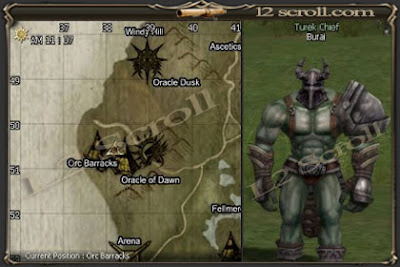 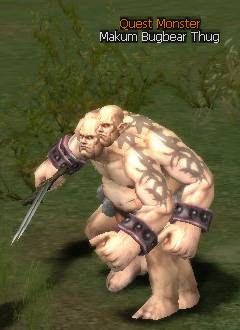 11) Go back to Gludio Castle Town, and walk in the place marked on the map and you will find the Vuku Chief Driko (he stands in front of a house) . He will send you kill Marsh Stakato Drone that can be found in the Cruma swamp. You will to collect 30 skins / shells. After collecting 30, go back and talk again with Driko and he will give you the last seal. 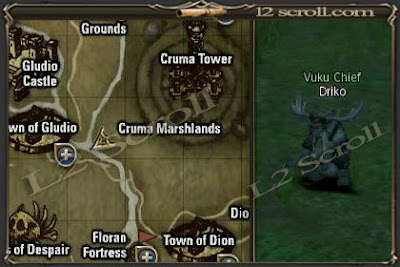 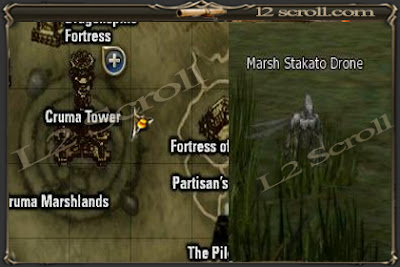 12) Go back to Chianta in Dion. The 5 seals will disappear and he will send you to kill a few more monsters:
---> Go to Oren and will walk to Timak Outpost. Kill Timak orcs (warrior, soldier, shaman, archer.. be away from the trooper leader) to pick up 20 Timak Orc Heads. 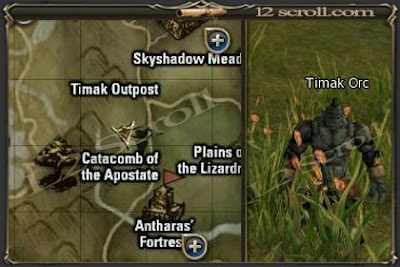 ---> Go to Hunter's Village in the west of the village and kill Tamlin orcs until you get 20 Tamrin Orc Skulls. 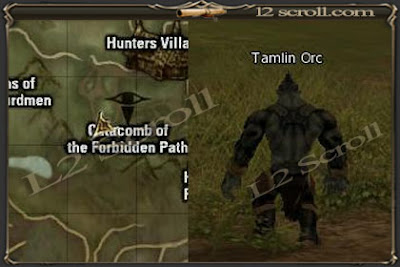 13) Go back to Chianta in Dion and talk to him.


14) Now go to Orc Village and talk to the Seer Tanapi. He will tell  you that the Ragna orcs stole the Tantos tribe's Seal. And ask you to get it back. 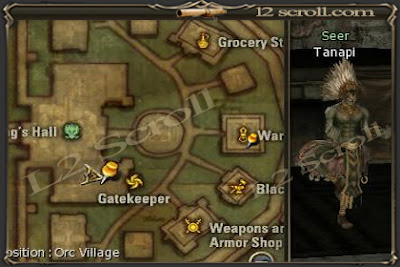 15) Go to Southern Immortal Plateau Region and walk to the location marked on the map and kill Ragna Orc Overlord or Ragna's Seer, until the quest monster Revanant appears. Kill him and get the stolen seal (Tantos tribe's Seal). 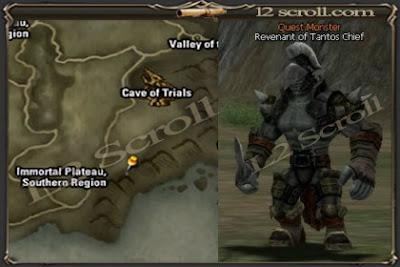 16) Go back to Orc Village and talk to the Seer Tanapi again and delivered the Tantos tribe's Seal that had been stolen. He will give you the quest item Ceremonial Box and ask you to go talk to Kakai, the Lord of Flames. 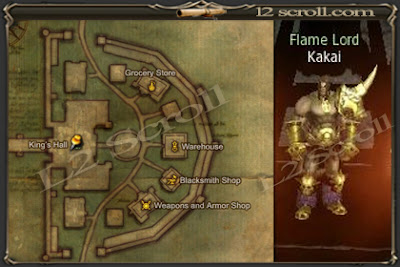 17) Talk to Kakai, the Lord of Flames (just up the ramp) and he will give you the certificate. The ceremonial box will disappear and you will get 40000 experience and 5000 SP and you will receive the final quest item Mark of Glory.

August 11, 2019
2ND CLASS TRANSFER QUESTS have 3 quests to be done. After get the mark of the all quests go to Master Guild of your class to change to your 2nd class profession.
Follow the links below and Good Luck.