Saga of the Cardinal


1) The quest starts in Oren Castle town in the church with High Priest Hollint. He tells you to find the Saint of Light, Agnes, in Goddard Castle Town. 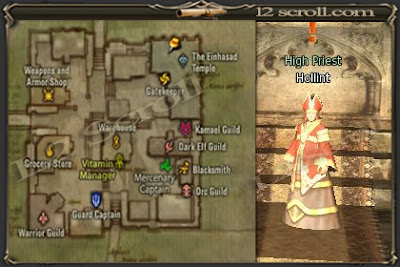 2) The Saint of Light can be found around the Magic Shop. She tells you to find Duncan in the Hot Springs. 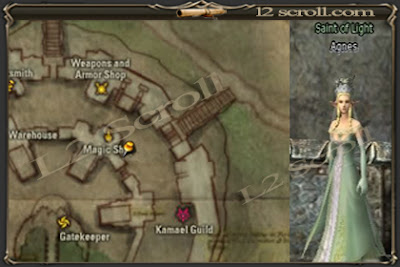 3) Chef Duncan and Chef Jeremy are both in the same area in Hot Springs, in the little camp near the center. Duncan tells you to go to Jeremy for the ice crystals. 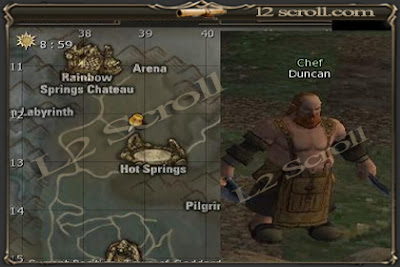 Jeremy sparks off another related but separate quest. He has several quests, you want The Finest Ingrediants Part 1.
Once you get the ice crystal from this quest return to Chef Duncan.Chef Duncan hands you a well-packaged jar containing the food  to take it to Saint of Light Agnes.

4) Return to Saint of Light, Agnes in Goddard. She tells you to find the 1st Tablet of Vision.


5) Port to Hunter's Village and use the Northern Enchanted Valley Port or go to Aden and use the West Gate to leave the town. Find the 1st Tablet of Vision and click on it. You are then told to travel to the Valley of Saints to find the next 2nd tablet. 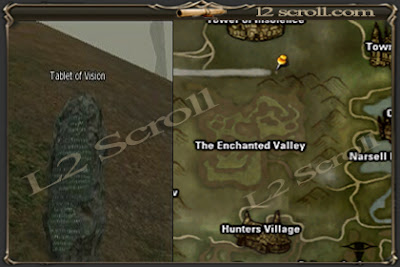 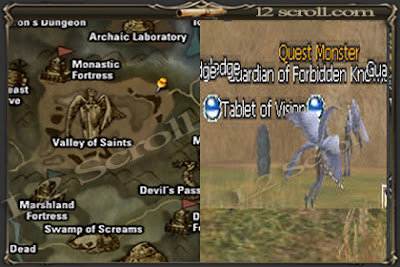 7) Now it's off to North of the Border Output for the next tablet. This one begins to tremor and tell you someone is nearby! This spawns three mobs. One is called Fallen Angel Haures. They can be hit with Might of Heaven/Disrupt Undead so sleep/root/whatever to crowd control and take them out. You cannot have help with this or they will disappear, no outside buffs during the fights, no heals, nothing. If they disappear you have to start over. After kill him talk to tha tablet again and you will earn Resonance Amulet - 3. 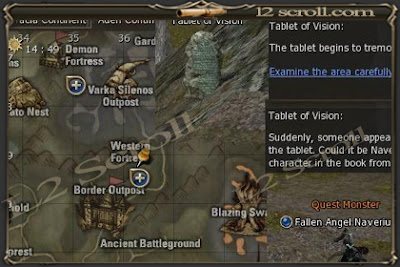 8) Go to Goddard again and find Priest Bastain. In order to obtain the 4th Resonance Amulet, you must choose to do alliance with Ketras or Varkas Silenos to obtain  the rights to make the quest that will give you the Divine Stone of Wisdom.

9) When get the Divine Stone of Wisdom, go back to Priest Bastian in Goddard town. He gives you Resonance Amulet 4, and tells you to to find the next Tablet of Vision .Go to Ketra and go walking in direction of Monastery of Silence and find the Tablet. Talk with it and get the 4th Amulet. 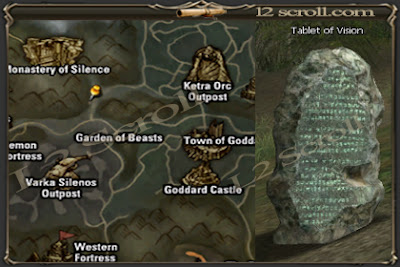 10) Back to Bastain at Goddard, he tells you that the stone of communte is held by the Archon of Halisha.

11) Go to Wall of Argos and walk to Shrine of Loyality. You need to kill 700 mobs and on the 701 he will  appears. You can be in party to get the itens more fast but you have to kill Halisha solo. You will get the 5th Amulet.(you could also go to the option with 4 sepulchers but is a much harder). Monsters to Hunt: Grave Scarab, Scavenger Scarab, Grave Ant, Scavenger Ant, Shrine Knight and Shrine Guard. 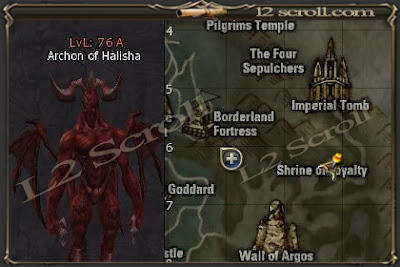 12) After kill Halishs and get 5th Amulet go to the 5th Tablet. It is in Wall of Argos too. Talk with it and get the location of the 6th tablet.  It tells you to find the next Tablet of Vision north of the Seal of Shilen. 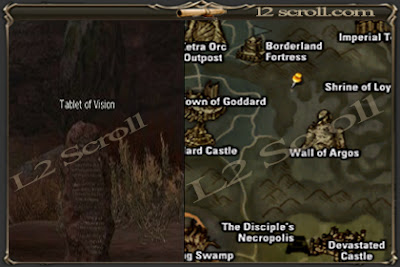 13) This is a little confusing in my opinion because thanks to C5 we now have a port called Seal of Shilen, and you are NOT going north of that port, it's actually south located here.
The tablet tells you someone must be nearby and to patrol the area. Two thing spawn at this point, Fall Angel Tanakia and a NPC called Dawn Witness Franz. The mob is yellow to you at 76. Franz tells the mob "you are stronger than I thought but I'm not weakling" and calls you out by name to fight together and "crack his skull". If you don't help attack the mob they both disappear and you have to talk to the tablet again.When it's over Franz tells you he'll pay you back and won't forget you. You earn Resonance Amulet 6 and he disappears. 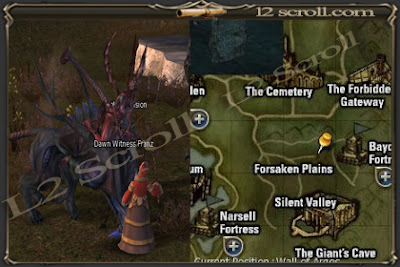 14) Back at Oren castle town, speak to Hollint.


Grats you are now a Cardinal!