Required materials: 1 Hellfire Oil, 5 Lunargents that can be obtained  from quest Supplie Reagents

1. Find Talien standing on the stairs leading to Einhasad Temple in Aden. He asks you to bring him the record of the seventeen nemesis who once challenged the Land Dragon. 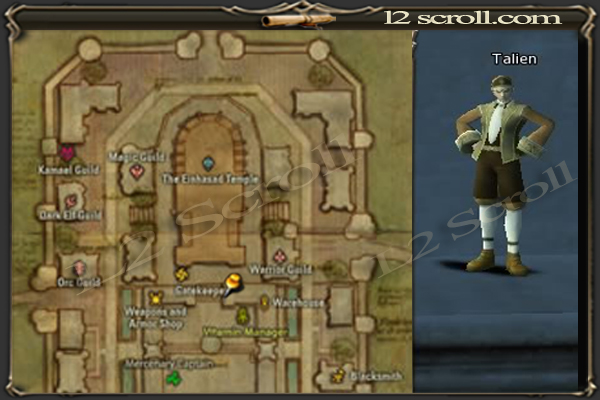 2. Visit Gabrielle, a direct decendant of one of the heros. She is located near the west exit of Giran town square. She mentions a poet in the hero bunch who became an undead guarding Antharas. 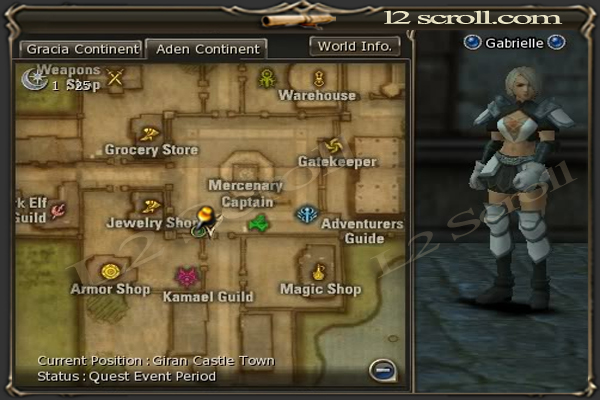 3. Locate Antharas Watchman Gilmore at the entrance of Dragon Valley. He says that he is too busy and sends you to find the Elf Witch Baraham, who is also one of the seventeen heros. 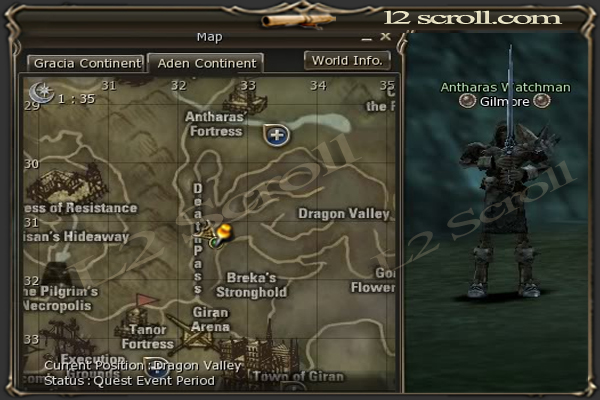 4. Baraham is inside a cave west of Beehive. If you take the road from the beach leading up towards the Monster Race Track, the entrance will be on your right. You will find Quest Monster Baraham in there, surrounded by six Quest Monsters Cave Basilisks. Kill Baraham to get Legend of Seventeen. The basilisks are social but they should all be dark blue to you at this point and fairly easy to kill. 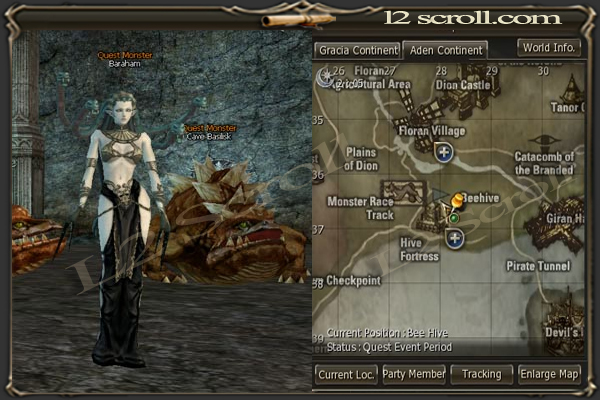 5. Go back to Talien. This time he wants an echo crystal containing the song about King Raul and the unification of his kingdom.

6. Talk to Melody Maestro Kantabilon in Heine's Grocery Store. He says he would gladly give you the crystal but he first needs to restore it. 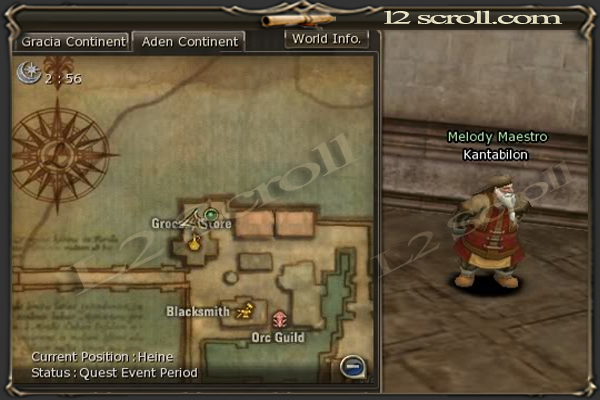 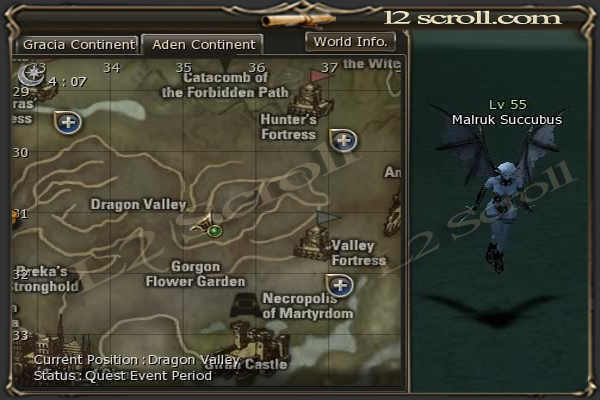 NOTE: IN H5 the acquisition rate of the Malruk Succubus Claw and Scarlet Moss items has increased and they are at watchers tumb in end of privates academy. Taik Orc Supply Leader - Cemetery monsters now drop Scarlet Moss (rather than Splinter Stakato Drones).

8. Bring the claws back to Kantabilon.

9. Return to Talien in Aden with the echo crystal. He yet again asks you to find a record for the third legend concerning heros who fought Beleth.

10. Meet Master Stedmiel in Warrior's Guild at Hunter's Village. He gives you a faded poetry book. 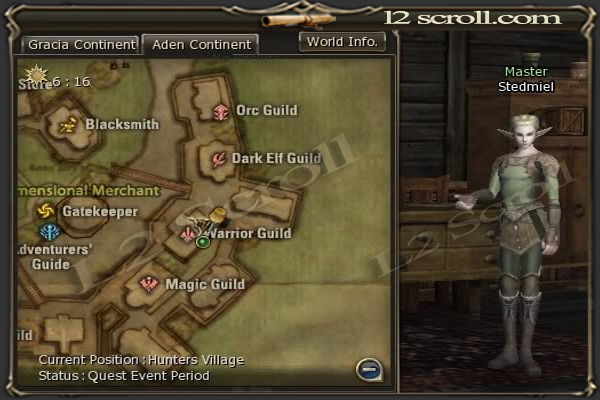 11. Back to Talien in Aden. He tells you that his sponsor, Virgil, wants to see you.

12. Go to Virgil in Rune. He is up on a balcony behind the temple with his colleague and his sick granddaughter. 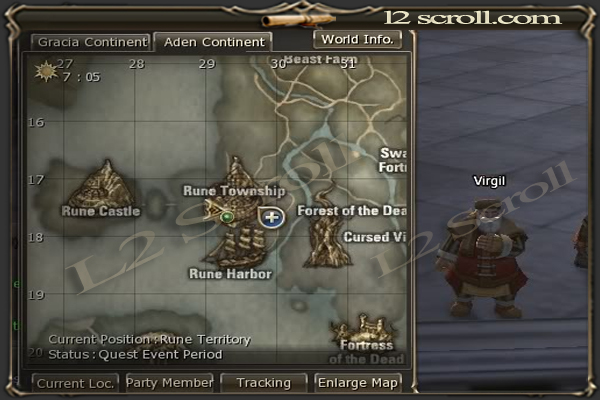 13. Virgil asks you to help his granddaughter rid of her nightmares. Speak with Ogmar for more information. He tells you that the Grand Seer Rahorakti has a cure. 14. Grand Seer Rahorakti is located in the Mystic Guild just underneath the temple. He says that he needs 5 units of crimson moss from the Splinter Stakatos in Swamp of Screams to prepare the medicine. 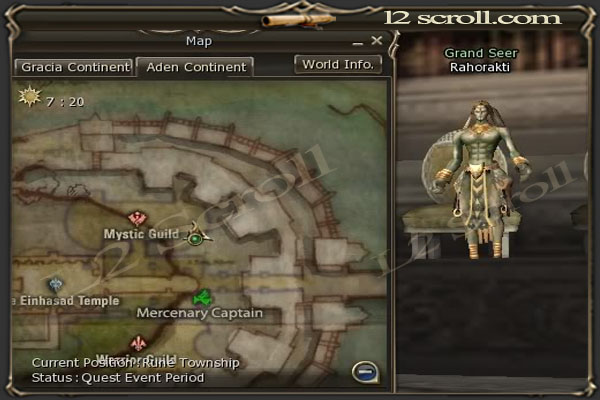 15. Hunt Splinter Stakatos, Splinter Stakato Walkers, Soldiers and Drones. The drop rate is about 1 moss per 30-40 kill but again not last hit required. Hunting in Swamp of Screams is a bit tricky since the monsters here have the tendency to run for the closest nest and bring back reinforcements when their hp falls low regardless of where you are standing. Make sure you bring someone who can root them because the Drones resist sleep. They also do bleed and stun.
NOTE: IN H5 Taik Orc Supply Leader - Cemetery monsters now drop Scarlet Moss (rather than Splinter Stakato Drones). 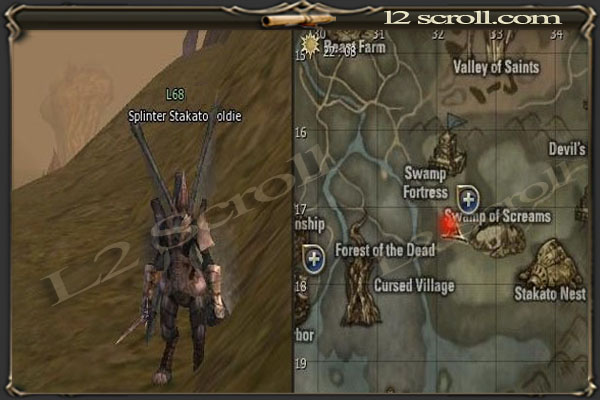 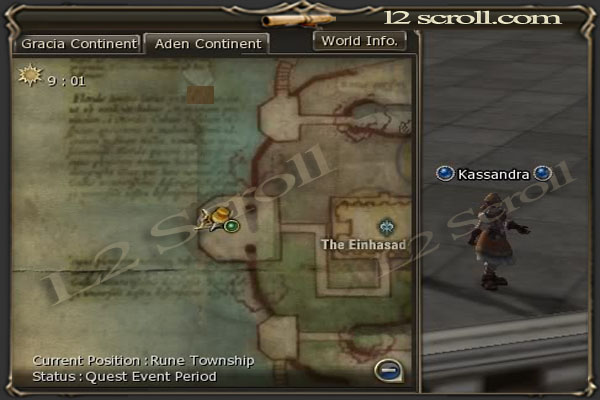 18. Go to Goddard. Caradine is standing by the east gate.She will ask you to talk to Blacksmith Noel at Goddard too. 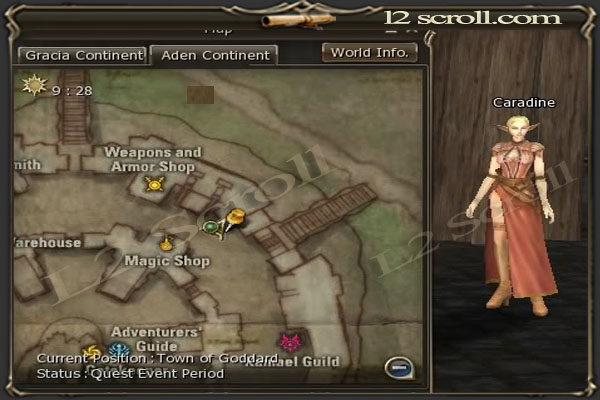 19. Head Blacksmith Noel reluctantly accept your offer to help them. Collect 5 lunargent and 1 hellfire oil.  Refer to Supplier of Reagent quest on where and how to obtain these items.

NOTE: IN H5  the request from the Head Blacksmith Noel, has been removed and is no longer available. Then you have only to talk Caradine and she gives you Virgils letter to start part 2. 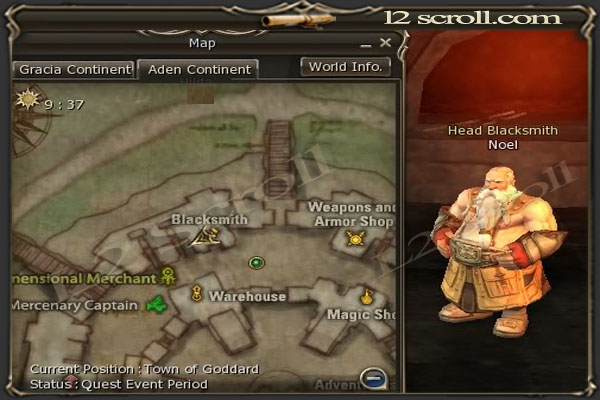 20. Once you've got the final items, return to Noel.
21. Go back to Caradine. She gives you Virgil's Letter to start the part 2 of Path to a Nobless. Go talk to Virgil once you reach lvl 60 on your subclass and start the quest Possessor of aPrecious Soul - Part 2 .