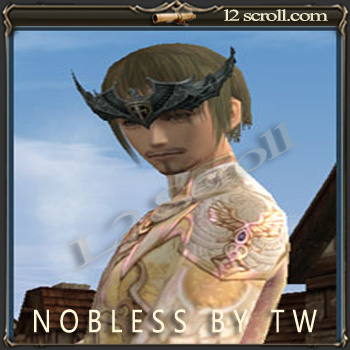 In the Gracia Final a player can now become a noblesse through one of the Territory Managers, regardless of whether they have a subclass or not. To do this costs a specific amount of territory badges.
Territory wars (TW) are pretty similar to castle sieges but both - mercenaries and clans may participate. The territory consists of castle(the eye of the storm  ), the corresponding town or village, territory fortress and hunting ground. There are 9 territories:  Gludio,  Dion,  Giran,  Oren, Aden,  Innadril,  Goddard,  Rune,  Schuttgart
First of all you must register to a territory. Choose a territory and speak to Mercenary Captain  and click the button “mercenary sign up” for a solo character, or the button “Clan Sign UP” in order to register  all the clan players. If your clan has a castle you are already singed to the castle territory.  TW registration/cancelation period ends 2 hours before the TW begins.
TWs occur 1 day before the castle siege (Saturday-TW->Sunday-Castle Siege). Only players above level 61+ that have completed their 2nd class transfer are allowed to join the TW.
To  acquire  the badges you need for the nobless ,you must kill 5 classes of an enemy tw supporter!
Look the classes you will need kill:
Key Targets:
Overlord - Dominator - Warsmith - Maestro.

How many you need to kill is random. Once someone in your party kills a certain class a notice will pop up on your screen  "you have killed x of x of class x" , once you have killed all you need , the notice will change to "you have weakened their defences (or magic)".
After this notice any subsequent kills will not count towards your own total but others in your party might not be done yet so keep killing till all your party gets the same message.If you kill enough of each class you will earn usually between 40-50 badges each tw.
As for catapults, they do give badges for killing them. You need 100 badges  to become Nobless. This means 2 territory wars,  so a month.
When you have them all 100,  go to Territory manager in the area you have chosen and select the «Ask About the task». Click the next option in the chat that  appears and congratulations you just became Nobless.