1) This quest starts in Aden in the Dark Elf Guild with Magister Hanellin. She tells to you go to Giants Cave and find the Titan's Powerstone from Lesser Giant Elders and Lesser Giant Mages. 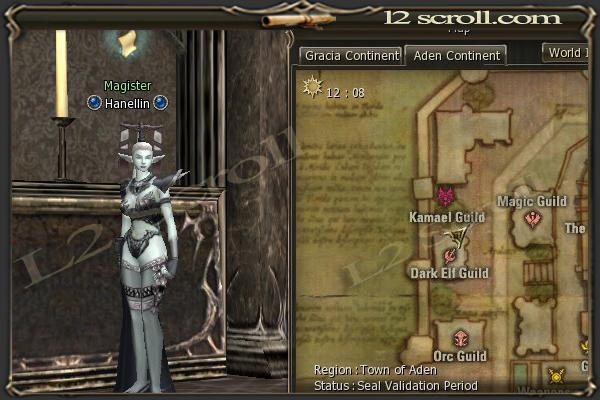 NOTE: In Gracia Epilogue due to the changes made to Giant's Cave, The Titan's Powerstone for the 1st part of the quest has been changed to a Shell of Monsters and is now dropping from Yintzu and Paliote in Forsaken Plains.


2) Both of these mobs are found at the bottom of Giant's Cave. It is not 100% drop. When you get the Titan's Powerstone go back to Aden. 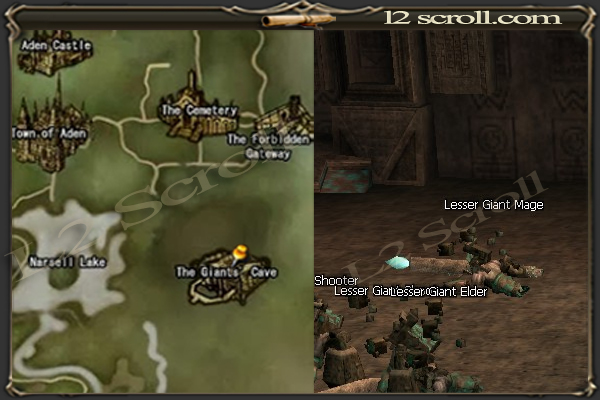 NOTE: in Gracia Epilogue, due to the changes made to Giant's Cave, The Titan's Powerstone for the 1st part of the quest has been changed to a Shell of Monsters and is now dropping from Yintzu and Paliote in Forsaken Plains.

3) Talk to Hanellin and she sends you to find several other people.
4) The first one is outside of the north exit of Aden, Claudia Athebalt. She sends you to the Ark of Secrecy 2. 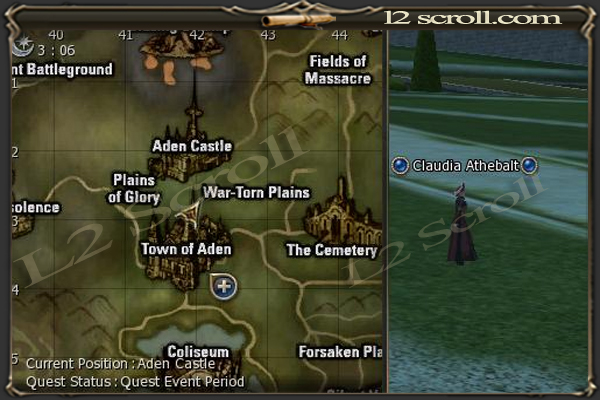 5) The ark 2 is in the Aden Cemetary. Speak to it. An angel will spawn and you will need to kill it. You can have party help but need last hit though. It will drop a key.Talk to the chest again to get the quest item. 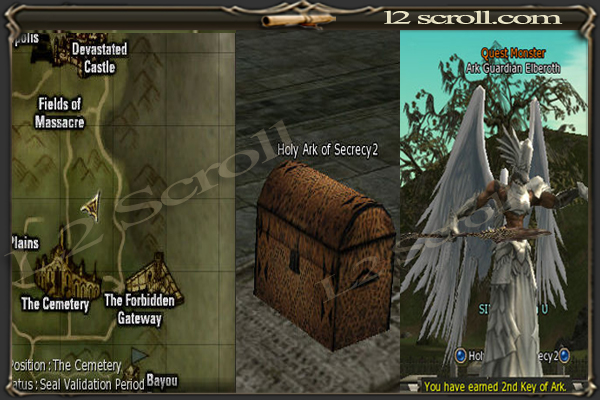 6) Go to talk to Martien who is in Giran. He tells you where the next Ark3 is. 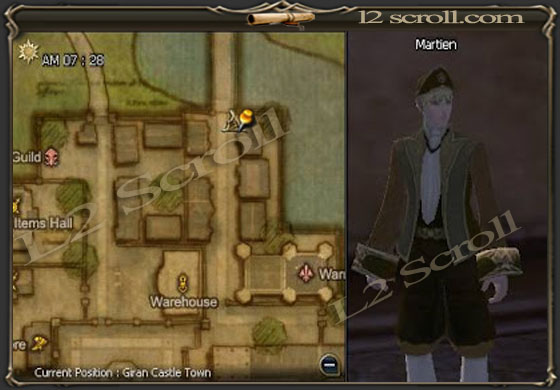 7) The ark 3 is at Tanor Canyon on top of a mountain. Talk to the chest An archer mob will spawn, he should be fairly easy to kill like the first one. You can get help if you need but you need give last hit.After kill him talk to the chest again. 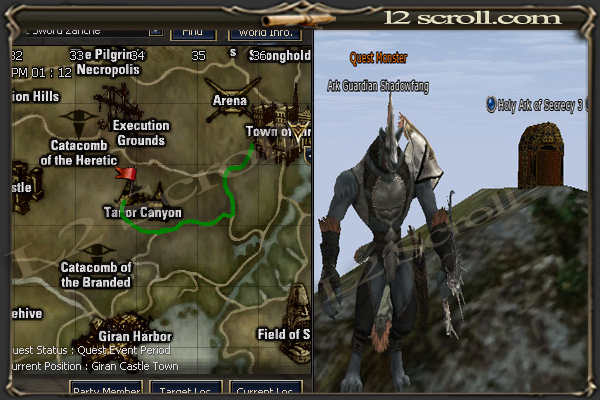 8) The final person to talk to is in the Dark Elf Village in the Temple, Magister Harne. 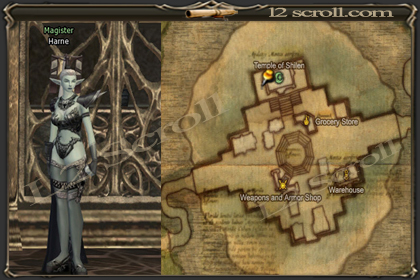 9) You will want to find the dead angel before the chest this time. It is up the side of the moutain. Speak to it. Now at this point the worst of the mobs spawns, a mob called Angel Killer. He has 9x hp! He does melee damage as well as various ranged nukes. If you are not a good damage class, bring a friend. He is classified as undead so an EE or bishop can use Might of Heaven on him. This guy has super pdef also so again, unless you can put out a good amount of damage fast you will need help or he will regen faster than you can kill him. When he dies talk to the corpse of the angel again. You will get the key, and the Ark 1 is in between the rock formation you should be able to see from your current location. 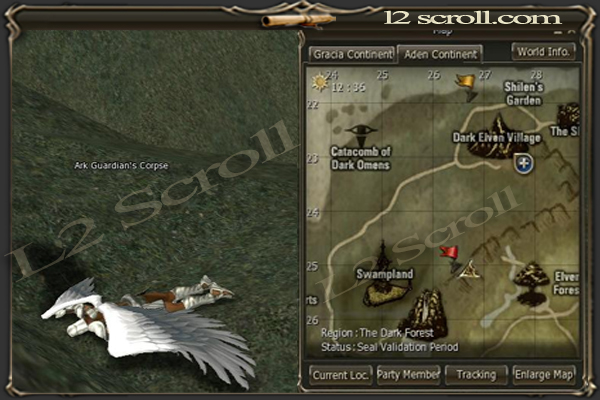 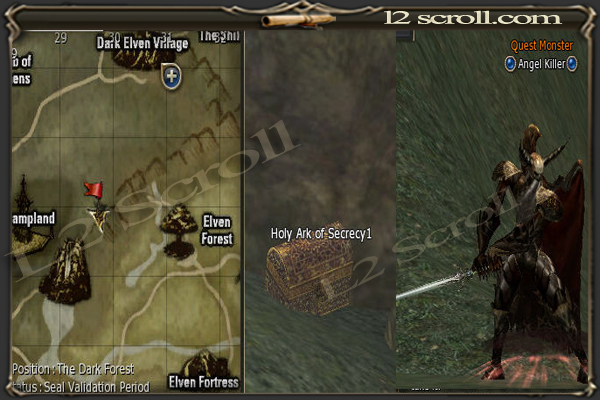 10) Now You need to buy 1 Healing Potion and 5 Antidotes. You can buy those at the Grocery Store. Go back to Aden to Hanellin talk to her 2 times and she will give you a White Fabric.

11) ATTENTION :At this point the quest has two options, 1) Meet the Emperor or 2) Make some money. If you choose Meet the Emperor once you bloody your one cloth, the quest ends. There is no reason you should choose this.You have to choose Make some Money and she tells you to bloody the White Fabric by going to the Tower of Insolence and fighting Platinum Tribe Overlords or Shaman on the 7th floor. You can get the cloth bloody by hunting these mobs normally but this way can take hours. Most people pull one of these mobs into a hallway and get someone to paralyze it, and then beat on it with their fists or a fast low damage weapon. It seems to help get the fabric bloody faster if you hit it many times as fast as possible. 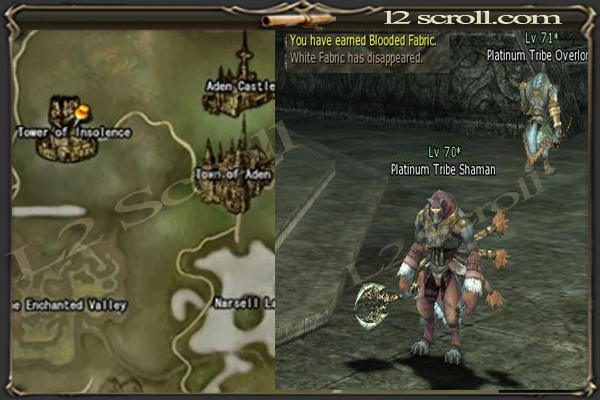 12) When you bloody the one cloth  go back to Hanellin. She will give you a pack of 9 more which you can bloody on the Seal Angel and Guardian Angel on the 10th floor of TOI. Then you will can visit Baium nine more times without having to do the whole quest again

IMPORTANT: BUT if you want to find Baium, DO NOT talk to npc (Hanelin) again.If not she will take all of your Blooded Fabric and you will have to do the quest again.

Blood Fabric is the item needed to enter Baium's room. Rest assured that esteitem is in the Quest Inventory and there is no danger of being dropped there.

Now you can use Bloody Fabric to go see Baium at the top of TOI. 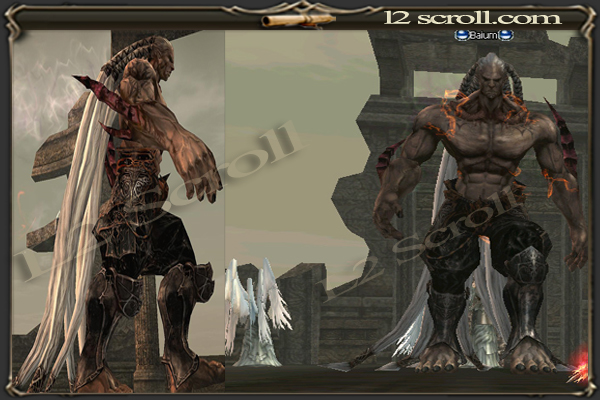