Party Matching
Lineage II has a build in party matching system for making parties with other players you do not necessarily know. The party matching feature can be opened by typing "/partymatching" in your consule or by clicking the party matching icon in the user interface.
When using this function, any player on the server can see that you are looking for a party. You don't need to stay in town and you don't need to be in the same vicinity of the people you want to be partied with. This works out especially well for characters still leveling up, as you can go do a quests or grind while waiting for a party to be matched up with anywhere in the world.
By simply leaving the party matching window open, players looking for your level range can see that you are a potential candidate for their party. Or if you want to start a party, just open a room and wait for interested players to join your room or invite them from the waiting list. 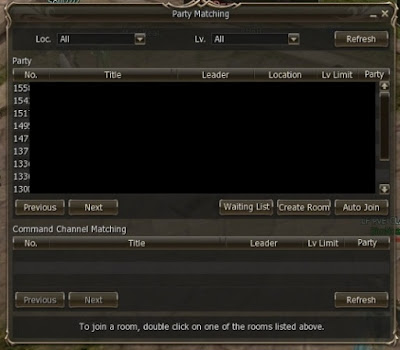 Open the party matching window by clicking the respective icon or typing the command as described above.


2)  The list of groups that are looking for characters to play together, when you hover over the name of the group opens a window with a list of already in the room, a group of players.
3)  Member List pending the entry into the group - you can invite a group of the desired character without waiting until he would find room in your group:
The rest of the party matching window is pretty self-explanatory. It is important to note that rooms are not the same thing as parties. The room owner still needs to invite players into a party. This allows for players to organize a party without actually creating one until everybody is ready. If you want to do other things while waiting for your party to be ready, you can minimize the window in a simular fashion as minimizing the inventory window.

Use the "Create" button in the interface of the search party.
Enter search criteria of the party:
Open the window of the room party and the name of the character appears yellow inscription "search party":
At the bottom of the chat room is the party chat is accessible to everyone who is in the room party.