What is Kamaloka?
The Kamaloka are instances where you can get much exp, sp and drops. There are 3 types of them: The Kamaloka Hall of Abyss ( added in Gracia Part 1), Kamaloka Labyrinth of Abyss ( added in Gracia Part 2 and Rim kamaloka (added in INNOVA-Official Russian server in 2014).
Before you enter Kamaloka you should definitly start the related "Mutated Kaneus" Quests. You can accept this quest for each town. For that you just need to kill the boss on level x3 and x6 for each town once. After that talk to the NPC again. It will give you SP, Adena and EXP. Totally worth it, especially for beginner.
Quest Mutated Kaneus

1- The Kamaloka Hall of Abyss ( all kamalokas with end 3 and 6- Ex 23/36/33/36/43/46....)
The entry requirements for this new instanced dungeon are as follows:
NOTE1: The entry limitation time resets every day at 6:30 AM (server time). The Guard Captain
aptNOTE 2: There is a quest into kamalokas to get a lot of itens : Certification of Value
NPC is located at the center of each village or town that is listed below.Locations of Kamaloka + character levels needed for entry are as follows:

3- Rim Kamaloka
Rim Kamaloka is a solo kamaloka that was implemented in Korea as an instance zone that was only accessible trough a certain branch of net-cafe and on Innova it will only be available for Premium users.  Inside you will find mobs that give pretty good exp, are easy to kill and based on how well you perform you will get a reward at the end of the instance (20 minutes).

GENERAL RULES FOR KAMALOKA
- The kamaloka is available once per day, but it's not based on when you last did it, but rather on a set time (resets for everyone at 6:30am CST).
- You need a group of 2-5 people to do a normal Kamaloka, or up to 9 ppl to do the special kamalokas (more on those later)
- These bosses are not raidbosses, they can be bled, stunned, rooted, etc. Also they do very very little damage (alot like a normal mob) and can be killed without much trouble in most cases and the amount of xp from them is almost equivalent to a raidboss
- You must be within 5 lvl's of the Kamaloka to port in
- To enter, the party leader talks to the Instance guard located in town and ports you in (sorta like you'd enter a rift)
- In the kamaloka, you can't bring in outisde buffs except for the noobie buffs if your of that lvl. So, if you want any buffs inside, bring along a buffer.
- Kamaloka's have a 30minute time limit, and if you fail to kill the boss you can try again after your ported out, although he'll also be restarted at full hp.

HOW TO ENTER KAMALOKAS
One can enter once per day and LVL of the players must be +5; -5 relation to the Kamaloca levels. To enter the Kamaloka, all the party needs to be gathered before Input npc. NOTE: The screens are from Dion Kamaloka but the process is the same to all kamalokas.

1. The leader of the party then chooses the dialog options with the NPC - "Enter Kamaloka". The screens are of Dion Kamaloka but the process is the same in all kamalokas. 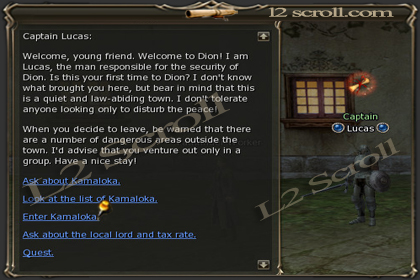 2. Now choose the desired option and the whole group will be transported into the dungeon. 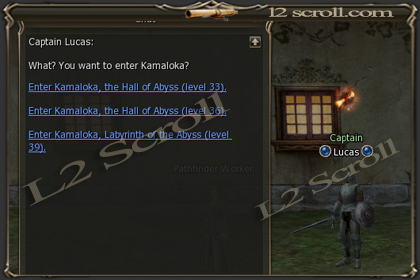 NOTE: In case of death you can come back to town and go again using the same option that the leader used. If 5 minutes at no character within the Kamaloca resets and reloads all the monsters again. If you can not kill the boss, you can try again. Show time remaining notices to the members of the group when lacking 10 minutes, 5 minutes, 2 minutes, 1 minute and 30 seconds.

LVL 23 - Gludio
Appearance: Bugbear
Special Skills: AOE Stun
Minions: None
Strategy: Just attack, very easy to 2-man melee should be able to duo it. It does pathetic damage to you, and is only annoying for the aoe stuns.

LVL 26 - Gludio
Appearance: Ol Mahum
Special Skills: AOE hit (don't keep your baby pet nearby)
Minions: One, another melee minion to back him up. He'll only summon the 1 minion though so you can kill it to have him resummon later
Strategy: Very easy to 2-man provided both players can wear heavy--otherwise use three players. Have lowest DPS tank hit the minion to take aggro, then just ignore it until the fight is over.

LVL 33 - Dion
Appearance: Undead Bear
Special Skills: Stationary AOE Smash (x5), Rsk. Haste
Minions: None
Strategy: Another easy boss, he will periodically run to one player and sit his [censored] down to smash the ground dealing AOE damage around him. Simply run away until he finishes doing this (5 times). Also, at 10% health, he kicks on haste so his attacks become a lot faster.

LVL 36 - Dion
Appearance: Floating Eye
Special Skills: Aura Flare, Drain Health
Minions: Unlimited
Strategy: The boss and his minion will use both magic and physical attacks often so ensure you have a good set of jewelery. He will periodically summon an eye to assist him but unlike other kamaloka bosses, he will summon more and more despite already having an active one.
Whenever he spawns a minion, kill it--Otherwise you may end up with 5 pelting at you.. and you will die. Even with Top D jewelery, his life drain will crit often for 400-900 damage so make sure you keep your HP above 50%.
Tank use a polearm for this boss to hit both the boss and the minion at the same time.

LVL 43 - Heine
Appearance: Mutant Stakato
Special Skills: Nothing notable
Minions: One, healer
Strategy: When his HP dips below 50%, he will summon a healer which heals him for quite a bit. This boss is extremely difficult and you will probably not be able to 2-man this one. After you kill his healer, he will spawn another one right away. I recommend sleeping the minion constantly so that it is not healing him and you are not wasting DPS (because he will spawn another after it dies anyways).

LVL 46 - Heinne
Appearance: Dragon
Special Skills: Soul Confine
Minions: None
Strategy: This boss is easy to 2-man provided that both players provide adequate DPS. This boss will periodically use Soul Confine on one player (Lasts roughly 10 seconds) which is similar to paralysis--except you cannot receive damage while confined. He also uses an AOE water-element skill, but it does not do a lot of damage unless you are not wearing jewelery.

LVL 53 - Oren
Appearance: Demon
Special Skills: Disarm, Sonic Blaster
Minions: Suicide Bomb
Strategy: This boss can also be 2-man'ed quite easily provided both players provide adequate DPS. He will periodically disarm your highest DPS'er and use Sonic Blaster on the caster. Don't forget to re-equip your weapon!
He will also periodically summon a minion which flies to a player (usually the caster, but I've seen the melee DD take it) and explodes. A critical can do 2600 damage, even using a +3 BO set, otherwise it will normally do 200-500. Keep your HP near full because of this--you don't want to risk getting crit and killed.
If you'd rather not tank the explosion, you can simply run away JUST before it explodes. If you run away too early, it will simply follow you until you stop.

LVL 56 - Oren
Appearance: Undead Knight
Special Skills: None
Minions: Dark Panther (Unlimited)
Strategy: You'll need at least three players for this one. This boss does rather high DPS on his own and also periodically summons panthers (do not bother killing these). He will call out a players name and all panthers will attack that player. Have the target simply run around while others kill the boss and take turns running around as you are targetted by the panthers,till they switch to someone else.

LVL63 - Schuttgart
Appearance: Demon (like Falibati, half snake half woman)
Special Skills: No reports :/
Minions: One.
Strategy: It's a very easy Kamaloka, just kill the minion that will start to heal the main boss if you don't kill it quick.

Room 1
There are 9 mobs in room 1. Only one of them is true (the queen), other are fake and will appear again when you’ve killed them. If you kill the real mob, the fake ones will stop appearing, but it’s not necessary to kill them. In low lvl labyrinths you need to lure 1-5 mobs (depends you your party) and kill them until the party have killed the queen. Most effective way of finding the real mob is as follows: you should have a Dagger (lvl 52) in you party, who has Lure.jpg Lure skill and a Summoner (lvl 56), who has Betray.jpg Betray skill. The Dagger lures 1 mob, then the Summoner uses his/her Betray.jpg Betray on it. If this mob is a fake one, it’ll run and start attacking the real one. If the mob is a real one, this skill won’t affect it. If the real mob in room 1 is killed, P. Def. of Labyrinth Guard will decrease by 1/3. A party of mages doesn’t need to kill the real mob in this room. They may pass through the room staying very close to the walls, or use invisibility to move further.

Unlike Room 1, in Room 2 all the mobs are real. Once you’ve killed all the mobs in this room, M. Def. of Labyrinth Guard will decrease by 1/3. Short-range warriors or archers don’t have to kill the mobs in this room, they can pass through staying close to the walls or use invisibility to move further.
Players usually pass through this room staying close to the walls and M. Def. is not very important for tanks and other short-range warriors.

In room 3 there’s one strong mob – the Raid Boss. If you kill it, Labyrinth Guard’s attack will decrease by 1/3.

In room 4 there’s the Raid Boss - Labyrinth Guard and his companions: 2 warriors and 2 healers/buffers.
Tactics: The tank agres the Raid Boss, running around the big circle. At the same time, the party kills healers/buffers (Lost Assistant Guard). It’s very important to kill the healers first. Then you need to take down the healers, and then – the Raid boss. If warriors and healers start respowning, repeat the same tactics again.

--->RIM KAMALOKA
How it works
Kill as much monsters as you can but you have only 20 mins.There are several x1 non-aggro mobs inside. They dont drop anything. When you kill the mobs, there is opportunity that a stronger mob appears - Doppler or Void. The more of these additional mobs you kill, the better the reward. Don't hurry if you want the best reward. The goal is to get longest sequence of Dopplers/Voids from one ordinary mob. Kill them until they are finished, then go to the next mob.

How to enter
Talk to Pathfinder Worker (He is beside Captain of Kamaloka in all cities). 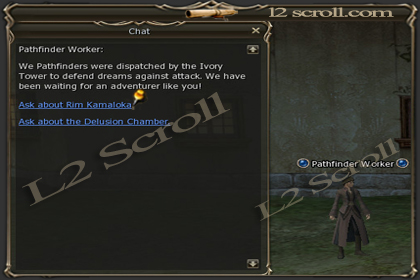 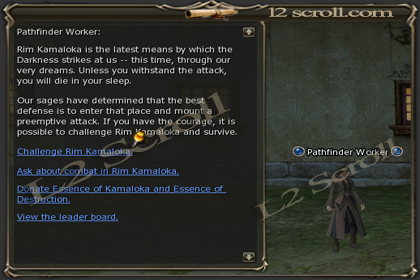 You can get Dopplers/Voids to appear by:
1. Over-hits, critical hits, powerful skills on the normal mobs
2. Tank aggro/hate on the normal mobs
Note: Voids will transform and temporary have frenzy, if you are a robe user: watch out!

Trade of essences:
• Essence Kanabiona received from Pathfinder can be exchanged for rewards:

January 01, 2017
CATACOMBS, NECROPOLIS   AND THE ORACLE   NOTE: All player that had completed the 2nd class quest profession can register at Priest of Dawn or Priestess of Dusk to can enter in catacombs and necropolis. Sixteen dungeons were added in relation to the Seven Signs. The Oracle is the place where the Festival of Darkness is held. The Catacombs and Necropolis’ are dungeons where the players can hunt monsters and get Seal Stones necessary for the acquisition of the Seals. These monsters, represented by Lilim and Nephilim, drop Seal Stones, but do not drop Adena. Access to these dungeons is limited based on participation in the Cabal and ownership of the Seals. Necropolis Necropolis of Sacrifice: level 20~30 monsters appear and it is located on the southern seashore of the Gludio Territory. Pilgrims Necropolis: level 30~40 monsters appear and it is located near the Partisan's Hideaway in Dion Territory. Worshipers Necropolis: level 40~50 m
Read more